The Cat and Fiddle 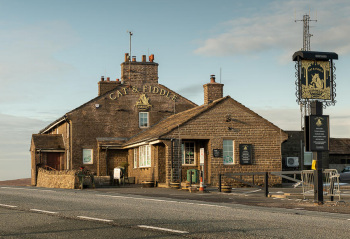 The Cat and Fiddle Inn was built in the year 1813 and remained a public house for over 200 years until it closed in 2015. The building which is now a distillery can be found on the A537 "Cat and Fiddle Road" between Buxton and Macclesfield.

In recent years up until its closure, it was a popular watering hole for hikers, walkers and motorists. Members of the biking community also enjoyed taking a break at this hilltop venue. At 1689 feet above sea level it was the second highest pub in England. The highest being the Tan Hill Inn, in North Yorkshire.

At this altitude, the weather during the winter months can be particularly harsh with snowfall making the road impassable vey quickly. It has been reported that snow fell and drifted to a depth of 15ft on more than one occasion over the years, sometimes trapping customers inside for days on end.

Since 2019 the building has been leased by Forest Distillery who have now opened a distillery, shop and pub (pre-booking only). They use local grains, spring water and wild yeasts to produce high end English Whisky. They also offer a tour of the distillery which can be booked online via their website. 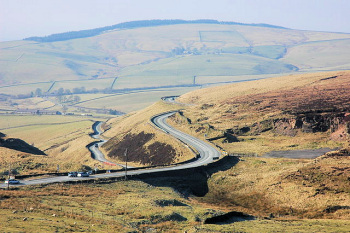 The pub gave its name to the notorious "Cat and Fiddle Road". This road has the reputation of being one of the most dangerous roads in the UK. The road is lined for the most part by dry stone walls on each side and has many sharp bends. It can be seen as a challenge by some motorcyclists who enjoy the thrill of riding this challenging stretch of road.

In recent years some safety improvements to the road have been made. These include resurfacing some areas, the introduction of average speed cameras, and additional roadside barriers.

The webcam at the Cat and Fiddle is particularly popular with the local community during bad weather as it helps to guage what the road conditions are like at any given time. The camera is pointing south towards the Cheshire town of Macclesfield.

Some history about the Cat and Fiddle pub

The Cat and Fiddle is a historic public house located in the town of Buxton in Derbyshire, England. The pub has a long and storied history, dating back to the 17th century, and is believed to be one of the highest pubs in England.

During the 18th and 19th centuries, the Cat and Fiddle continued to serve as a popular stop for travelers on the main road. It also became a popular destination for locals and tourists visiting Buxton, known for its picturesque location and excellent food and drink.

In the late 19th and early 20th centuries, the Cat and Fiddle underwent a series of renovations and expansions, which helped to establish it as one of the most popular pubs in the area. The pub also became a popular destination for cyclists and motorcyclists, who were drawn to the winding roads and scenic views of the nearby Peak District National Park.

During the mid-20th century, the Cat and Fiddle fell on hard times and was closed for several years. However, it was eventually purchased and restored by new owners and re-opened in the 1980s and became a popular destination for locals and tourists once again.

The A537 "Cat and Fiddle" road between Buxton and Macclesfield

The A537 is a major road in the north of England that connects the towns of Buxton and Macclesfield. This road is also commonly known as "The Cat and Fiddle" road, named after the famous pub located on the route. The A537 is a well-known route among drivers and motorcyclists due to its winding and scenic nature, making it a popular destination for those looking for a challenging and picturesque drive.

The A537 was first established as a main road during the 19th century, as a way to connect the towns of Buxton and Macclesfield. The road is approximately 17 miles long and runs through the heart of the Peak District National Park, providing breathtaking views of the surrounding countryside.

One of the most significant features of the A537 is the challenging and winding nature of the road. The road is known for its sharp bends and steep inclines, which can be challenging for drivers, especially those who are not familiar with the route. Despite this, the road is popular among motorcyclists and sports car enthusiasts, who come from all over the country to test their skills on the road's challenging layout.

The A537 is also known for its beautiful scenery, with the road passing through some of the most picturesque areas of the Peak District. The road offers views of rolling hills, lush forests, and picturesque villages, making it a popular destination for tourists and nature lovers.

The A537 Cat and Fiddle road is also a popular destination for walkers and cyclists, with several walking trails and cycling routes running alongside the road. These trails provide access to some of the most beautiful areas of the Peak District.

In conclusion, the A537 is a major road that connects the towns of Buxton and Macclesfield, and is known for its winding and challenging nature, as well as its beautiful scenery. This road is a popular destination for drivers, motorcyclists, and nature lovers alike, and offers a unique and exciting driving experience in the heart of the Peak District National Park.

The A537 - one of the country's most dangerous roads

Despite its picturesque views and challenging layout, the road has gained a reputation as one of the most dangerous roads in the country due to the high number of accidents that have occurred on it.

According to data from the UK government's Department for Transport, the A537 has one of the highest rates of accidents per mile of any road in the country. Between 2014 and 2018, there were approximately 80 accidents on the road, resulting in several fatalities and many more injuries. The majority of these accidents were caused by drivers losing control of their vehicles on the road's sharp bends and steep inclines.

The high number of accidents on the A537 has led to calls for increased safety measures on the road. Some of the proposed solutions include installing speed cameras and warning signs to alert drivers to the road's challenging nature, as well as improving road markings and visibility. Additionally, the Peak District National Park Authority has urged drivers to exercise caution when driving on the A537, and to be aware of the road's challenging layout.

Despite these efforts, the number of accidents on the A537 remains high. Many experts attribute this to the road's winding and challenging nature, which can be difficult for drivers, especially those who are not familiar with the route. Additionally, the road's popularity among motorcyclists and sports car enthusiasts may also contribute to the high number of accidents, as these drivers may be more likely to take risks and push their vehicles to the limit.

In conclusion, the A537 is a popular and challenging road that runs through the heart of the Peak District National Park. However, the road has gained a reputation as one of the most dangerous roads in the country due to the high number of accidents that have occurred on it. Despite efforts to improve safety on the road, the number of accidents remains high, highlighting the need for increased caution and awareness when driving on the A537.

Take a trip to Macclesfield Forest

Macclesfield Forest, located in the heart of Cheshire, England, is a picturesque woodland area that offers visitors a wide range of recreational activities and natural beauty. Known for its rolling hills, tranquil lakes, and diverse wildlife, Macclesfield Forest is a popular destination for outdoor enthusiasts, families, and nature lovers alike.

One of the main attractions of Macclesfield Forest is the variety of outdoor activities it offers. The forest is a popular spot for hiking and cycling, with a network of well-marked trails that wind through the woods. Visitors can also enjoy a peaceful stroll along the forest's many footpaths, taking in the stunning scenery and wildlife as they go.

Macclesfield Forest also offers a variety of educational and interpretive opportunities, including ranger-led walks and talks, and visitor centers that provide information about the forest's history, geology, and wildlife.

In addition to its natural beauty and recreational opportunities, Macclesfield Forest is also home to a variety of other attractions, including the Tegg's Nose Country Park, which offers visitors the chance to explore an 18th-century farm and learn about the area's history and heritage. The forest also offers a range of accommodation options, including campsites and holiday cottages, making it a great destination for a weekend getaway or a longer holiday.

In conclusion, Macclesfield Forest is a beautiful and diverse destination that offers visitors a wide range of recreational activities and natural beauty. From hiking and cycling to fishing and boating, there's something for everyone to enjoy in this picturesque woodland area. The forest's diverse wildlife and educational opportunities also make it an ideal destination for families and nature lovers alike. Whether you're looking for a peaceful stroll or an action-packed adventure, Macclesfield Forest is a destination not to be missed.